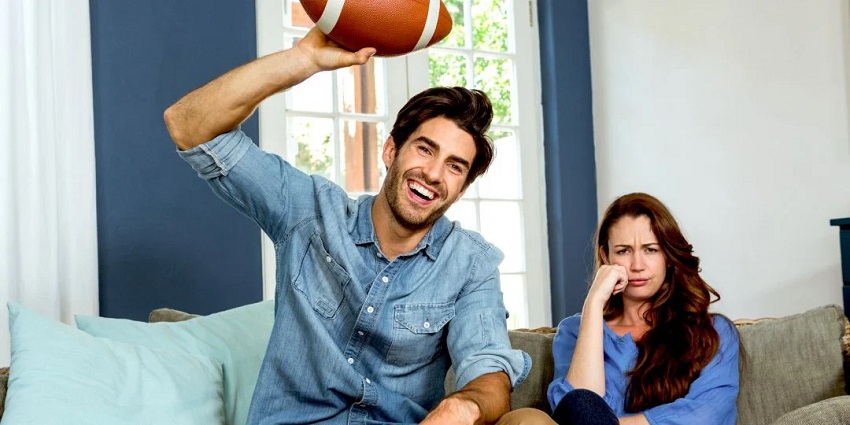 Men are into football by nature, or at least most of them are. Whether you are a football fan yourself or not, if your guy loves football, you’ll want to read this article from the best online casinos.

Make your Peace with it

He is into Football, that’s a fact now. Accept it, embrace it and deal with it. Perhaps most of the clashes that happen between husbands and wives are due to the refusal of that Football obsession. It’s either you’re too jealous, complaining about him not spending enough time with you or a lot of unfavorable impulses to snap out right into his face. If he doesn’t mind your fashion obsession, art enchantment or anything you are highly fascinated by, then you ought to be fully supportive and understanding of what he believes to be a wild obsession.

Guys love to have their space, imagine having his own piece of heaven, or to be more precise a place where he can be surrounded by stuff he’s utterly passionate about. You can do this for him, if you have an unoccupied room or any simple empty space at home decorate it with his favorite Football team items; a flag on the wall, some cushions with his favorite team logo, a flat screen TV, and you can also move his Play Station into this room. Awesome for him, peace and quiet for you! You can watch or do anything you want, get your own space too. He can also invite the guys over to watch the game with him in his territory, you wouldn’t have to worry about him going out a lot and coming home late.

Don’t mess with his Prada Heels

Does this seem weird to you? Well it shouldn’t .Guys who are obsessed about football usually have Their Team’s “Stuff” his favorite team jersey, cups , towels , wallets, key chains, signed footballs or authentic ones etc… His football gear is like your Prada heels, you wouldn’t want to mess with them, would you?

Get something out of it

Well, as long as the obsession is inevitable, you might as well get something out of it. Let him take the kids to practice, to you it might just be plain exhaustion but to him seeing his own flesh and blood playing his favorite game will be fun and exciting for him and for the kids too.

It’s his birthday and you are out of gift ideas, you can’t think of anything new or you just feel like the ideas are clichés .The answer is simply to make it “plain and smooth”. Like a little kid just so excited to see his favorite cartoon stamp, you could fix him a scrap book of his favorite team, footballers, news and remarkable games. He’ll get the same chills he used to have when he was a little kid. You could also get him a sports book or any home appliances with his favorite team logo print .They are just so easily satisfied!

Live the Dream with him

In case his dream is to share the enthusiasm together, go to the games with him! This would mean the world to him living the dream with his chosen partner, you would enjoy it too just like you both enjoyed playing online pokies for real money together.

Your husband being a football maniac might be getting on your last nerve. However, there are some things that you should value about that, mostly his commitment. Such a committed fan would be exceptionally devoted to you and his family. You should also admire how passionate he is about something, a guy without tenacious interest and passion can be boring and you wouldn’t like that. I mean who would, right?