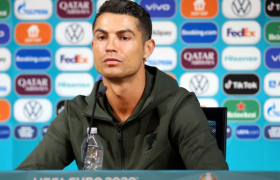 In one of the most talked-about moments from a Euro 2020 press conference, Portugal’s Ronaldo noticed that there were a couple of Coca-Cola bottles placed just in front of where he was sitting. Not wanting to be associated with the fizzy drink, he moved the bottles out of view and declared his preference for water. This seemingly inconsequential act on the face of things went on to have an unprecedented effect on the drink company’s shares.

Indeed, it was reported that after the move, the share price of Coca-Cola dropped from $56.10 to $55.22. This led to a $4 billion drop in the overall value of the company. The figures say it all. People realized that one of the world’s most revered stars didn’t like the drink, and that put them off drinking it themselves.

What Will Ronaldo do After Football?

This recent revelation suggests that Ronaldo will have a bright future in whatever he decides to do after he hangs up his soccer boots. However, when that will be is anyone’s guess. Most professional footballers start to wane around the age of 33, but Ronaldo is still looking as fit and sharp as ever at 36. He has shown no indication that he is thinking about quitting either.

It does feel as though Ronaldo’s time at Juventus is coming to an end, though. There has been a lot of speculation over the player’s future, with bookies anticipating that a move to Manchester United or Paris Saint-Germain could be imminent. Indeed, in the football betting markets, bettors can find odds of 300 for him to go to the English club and 200 for him to move to the French giants.

When thinking about whether Ronaldo is the most powerful celebrity in the world, it is also worth mentioning a few others who have a similar level of influence. Elon Musk has recently shown that his comments are able to dictate the rise and fall of cryptocurrency prices, for instance. Other notable figures include Emma Watson, Beyonce, Oprah Winfrey, and Tiger Woods.

This Coca-Cola move feels like a foreshadowing of things to come from Ronaldo. When he finishes his soccer career, it would be a shame if he didn’t exert his influence to help with worthy causes in the world. It wouldn’t be surprising to see the player go on to do more charity work and really make a difference to people’s lives.