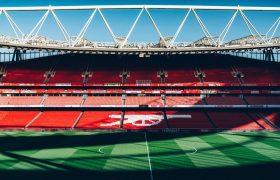 Football fans in a World Cup year often have a difficult sensation when the tournament is over. As the final whistle blows, some time in July, they look ahead to the rest of the year in the knowledge that the big event is over, and while there is plenty of club action to come, none of it matches that month in the middle when there’s a big match nearly every day, sometimes several one after the other. This year, the tournament is happening later in the year, so 2022 will come to a thrilling crescendo – but there will still be some people left feeling empty.

While the presence of the World Cup will have people rushing to casinononaams.casino to find a site where they can bet on the winner, the Golden Boot and the scorer of the first goal of the tournament, there’s one title nobody wants to win. For some players, the tournament is one that they will only watch on TV. And below, we’ll look at some of the most talented players in world football who won’t be present at its showpiece event.

Haaland is a ridiculous footballer. He scored plentiful goals in his home country for Molde before transferring first to RB Salzburg and then, swiftly, to Borussia Dortmund. Despite the climb in quality between Norway and Austria, and then Germany, his scoring rate hasn’t dropped. He’ll have his feet well under the table in Manchester by the time of the tournament, but won’t be on the plane to Qatar because, Martin Odegaard aside, Norway isn’t a nation blessed with many footballers of such quality. There’s time yet for him to play in future World Cups, as he’s just 21, but it’s a shame he’ll miss this one.

Liverpool fans watching the qualifying playoff penalty shootout between Egypt and Senegal will have been only too aware that, whoever won, one of their exceptional forwards would lose. In the end, Sadio Mane will be heading to Qatar while Salah, who missed a crucial spot-kick, will be back in Liverpool or taking a holiday to relax after the early stages of the Premier League season. Salah is an extravagantly gifted player with a style of play that would light up any World Cup, and this one will feel his absence strongly.

Italy are champions of Europe, due in no small part to Donnarumma’s heroics in a penalty shootout against England in the final. However, they are not one of the 13 European national teams who will be in Qatar this winter, having been knocked out in a playoff by North Macedonia. To salt the wound for the PSG ‘keeper, his error led to the goal that eliminated the Azzurri. For a second World Cup in a row, there will be no Italy at the finals, which also means no Jorginho, who at 30 years of age will now be wondering if he will ever play in a World Cup for the nation he has lived in for fifteen years and chose to represent over his country of birth – Brazil.