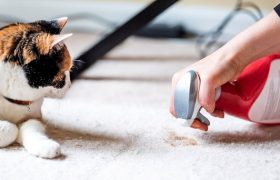 Cat is pooping on the floor. Why? When you find cat’s poo on the floor where it doesn’t belong, your first impulse is to run out and buy an automatic sifting litter box. You might even convince yourself that it isn’t a big deal — after all, your neighbor’s cat never uses his box. However, just because he doesn’t care about his box doesn’t mean that your cat is satisfied with his bathroom behavior. There are several common reasons for this troublesome issue — some of them far more serious than others.

Why is my cat pooping on the floor? 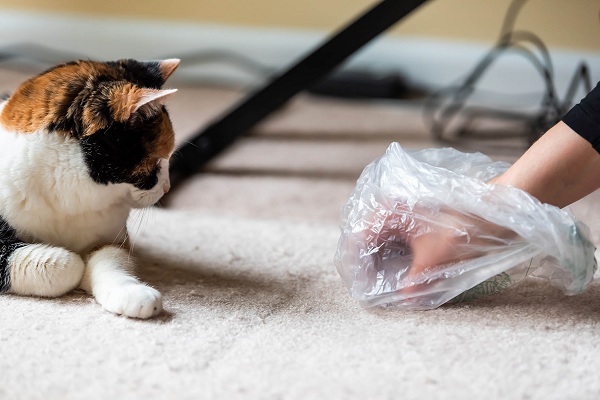 First, the easy stuff. If your cat is depositing his business on the floor, it could be because he’s sick. Vomiting and diarrhea frequently accompany gastrointestinal problems. Fluffy may no longer feel confident about her litter box when she isn’t keeping anything down or has liquid stools. Consider this reason number one to take your cat to the vet. Read also: Why is My Cat Throwing Up? Causes and Treatments

Another reason why your cat may be pooping outside his box is that he’s mad at it, and he’s trying to punish you by getting dirty. Cats get angry when their litter boxes get soiled or if they get changed around on a regular basis. If you change your cat’s litter box location frequently, your cat’s response may be to stop using the box. If this is your problem, try to stick with one location for the box.

What about “subtle” litter box problems?

Your cat could also be telling you that he doesn’t like his litter box. Perhaps it’s too dirty or too small for him, and if you make some simple changes, he’ll be happy to use it again. Here are some other litter box issues that might make your cat want to find another spot for his business:

* The litter box is too dirty * The litter box has a hood and your cat doesn’t like it (cats prefer open boxes) * Your cat isn’t used to the type of litter you’re using * There are too many people or other animals disturbing him when he’s in the box * The litter is getting trapped between his toes, making it uncomfortable for him * You haven’t scooped the litter box often enough

Treat cat pooping on the floor

If you want to stop your cat from pooping on the floor, it’s important that you figure out what is causing him to do it. You may have one or more issues going on at once — for instance, a dirty litter box and a messy room could be enough to make your cat take his business elsewhere. Practice patience and diligence when you’re trying to solve this problem and remember that it may take a while.

Since you-know-who seems to be so picky about where he does his business, it’s a good idea to clean the spots that he has already used for this purpose. You may not want to use an enzyme cleaner. However, there is some concern that enzymes and other strong cleaners (and deodorizer) might encourage him to use the space for his potty business again. It’s best to stick with a mild soap and just plain water.

Clean out the litter box

When you clean your cat’s litter box, try using unscented or minimally scented soap and nothing else. You may want to remove the hood from the box — most cats don’t like them. If your cat was experiencing pain when he used his litter box, he might be trying to tell you that there’s something wrong with it; try using a larger-sized litter box, for example.

Use a Feliway diffuse

If you want to stop your cat from pooping on the floor, it’s also a very good idea to use a diffuser that dispenses Feliway in the room where he does his business. You can get one at any pet store or order online. If you’re not sure whether your cat is mad at his litter box or if he’s having some other kind of problem, or you can’t figure out what to do about it, ask your vet for help. Sometimes, cats are very good at telling us what they want…we just have to learn how to listen!